Posted on January 31, 2012 by The Voice Of Bombay's Catholic Laity 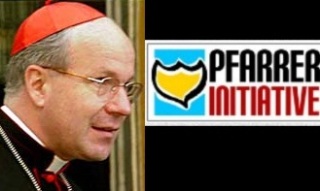 The highest representatives of the Austrian Catholic Church gathered with Vatican officials to speak about a group of priests who declared themselves “disobedient”, it has emerged.

The Salzburger Nachrichten newspaper revealed last Wednesday that Viennese Archbishop Christoph Cardinal Schönborn and two other members of the Conference of Austrian Bishops, went to Rome on Monday to meet with clergymen in the Vatican.

The paper claimed that the gathering was organised to discuss how to react to the increasing acclaim among Austrians for the demands of Helmut Schüller’s Preachers’ Initiative.

Schüller – who was president of Caritas Austria for some years before withdrawing to Probstdorf in Lower Austria to head the local parish – presented the guidelines of his movement half a year ago.

He said the Preachers’ Initiative wanted the Vatican to allow Austrian priests to give Holy Communion to divorced people. The rebellious group also want female priests in the Catholic Church and an abolition of celibacy.

A spokesman for the Austrian Roman Catholic Church confirmed today (Thurs) that the meeting took place on Monday.

He claimed that it was a regular gathering at which various topics were raised. Schönborn said already some weeks ago that he planned to raise the controversial issue when speaking with Vatican officials.

Schönborn said in several interviews that he was not denying the urgent need for reforms of the Church.

However, the archbishop also spoke out against Schüller’s suggestions which conservative representatives of the Church consider as radical propaganda. They also accuse Schüller of trying to split the Church. Schüller said the Church was on the brink of breaking up indeed – because of its leaders’ unwillingness to react to significant developments in today’s society.

Austrian Church officials did not confirm that the Preachers’ Initiative was spoken about in the Vatican on Monday. Newspapers report that the movement’s appeals were discussed indeed.

Schüller said he was not afraid of consequences over his actions. The ex-Caritas Austria president announced: “I appreciate that the Worldwide Church starts thinking about our ideals. Maybe this was the start of something.”

Schüller said last week he planned to cooperate with priests abroad who shared his opinions. “We receive a lot of approval from Catholic reform movements all over the world,” he said.

The Probstdorf parish priest also criticised the Vatican for its conservative attitude.
Schüller claimed it bore resemblance to an “absolutist monarchy”.
He added: “The Catholic Church must finally start taking its members seriously.”

Around 400 Austrian priests have joined Schüller’s initiative over the past months. Schüller pointed out that the decision to be “disobedient” towards the Vatican found all-round acclaim. Schönborn harshly criticised the group of priests for choosing this term.

Newspapers report that Schüller and Schönborn have no plans to meet in the foreseeable future to speak about a possible agreement.

Polls show that a vast majority of Austrians generally support the points of view shared in the Preachers’ Initiative.

The Vienna archdiocese has apologized for the publication of a list of people who have formally left the Roman Catholic church.
A statement says those affected have been asked “for forgiveness,” noting making the names public “is not allowed by state or church rules.”
The statement was issued Thursday after a priest in a village north of Vienna listed local church-leavers in the diocese newspaper.

The archdiocese says the priest has since “apologized in the form of a Mass and has written those affected a letter” of apology.

The rash of sex abuse scandals hitting the Catholic church has led to an increased number of people formally renouncing their affiliation.

That also frees them from paying a mandatory church tax.