Posted on September 30, 2011 by The Voice Of Bombay's Catholic Laity 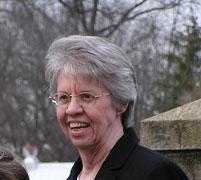 Sr. Mary Whited was an introvert, a woman who considered and weighed her thoughts before speaking.

But those who knew Whited, who died of cancer at age 70 on Aug. 31, did not mistake her quiet and gentle demeanor for weakness.

“I learned early on that it was not how much she spoke, but the quality of what she had to say,” St. Joseph Sr. Mary Dacey said at Whited’s funeral Mass Sept. 3 about the woman who followed her in the presidency of Leadership Conference of Women Religious. “And I learned to wait and to listen.”

Whited, a native of St. Louis, was a sister of the Most Precious Blood of O’Fallon, Mo., for 49 years. She was a teacher and principal, worked in formation programs for women beginning religious life, and served as leader in her community. She was her congregation’s superior general from 2004 to 2010 when her community’s motherhouse was transformed into a retirement village.

Sr. Fran Raia, current president of the Most Precious Blood Sisters, recalled that Whited said she never expected to sit across a table from cardinals at the Vatican, but that the women were prepared, and not fearful or defensive.

“We weren’t there to defend,” Whited later recalled. “We were there to speak our truth. And at the end of that conversation, Cardinal [Franc] Rodé [then prefect of the Congregation for Religious] said, ‘I’m going to meet with the pope next week. What would you want me to tell him?’ And I said, ‘Tell him we are faithful.’ And he said, ‘Is that all?’ And I said, ‘That is enough.’ ”

Upon Whited’s death, an internal communication to leadership conference members said, “Mary’s wisdom and quiet, gentle presence among us is a loss. Her ability to laugh at some of the foolishness that surrounded us at times is a gift that will linger in our memories of her. … Mary is now with the God to whom she gave her life. We offer prayers of praise and thanksgiving that the LCWR was blessed to share in that life.”

Conference spokeswoman Immaculate Heart of Mary Sr. Annmarie Sanders said Whited “cared passionately about the role of religious life and where it was being led as it moves into the future.”

Raia recalled her friend and former classmate as a woman of integrity, insight and vision who built relationships and shared herself in writings to inspire, challenge and encourage others.

“She was a quiet, gentle wisdom figure in our community who searched for the truth,” Raia said. “She was the person who stretched us to look at the big picture” of national and international concerns.

Whited said in May that her cancer diagnosis had given her life new purpose, “not doing more,” but rather reconnecting with people who had been significant in her life and living every day with quality.

“I want to be remembered,” she said, “for the relationships that have been established and how God has been present in those relationships.”

To that end, she visited with sisters, family and friends, and managed to attend a national meeting of the Leadership Conference of Women Religious in California a few weeks before she died.

Most Precious Blood Sr. Carol Orf and the sisters in her community house in St. Louis invited Whited to lunch after they learned the news of her cancer diagnosis.

She asked if Whited could ever forget that she had cancer.

Whited replied that the end of her days had brought new meaning to everything.

“There’s suffering and dying, but you realize all these gifts around you,” Orf recalled.